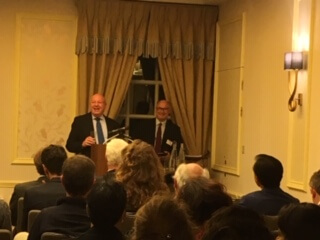 Earlier this month I had the privilege of introducing Sir Douglas Flint CBE, the Chancellor’s special envoy for China’s ‘Belt and Road Initiative’ (‘BRI’) at a special meeting of the Harvard Business School Club of London.

Sir Douglas Flint is the former Group Chairman of HSBC Holdings. He served from 2010 to 2017, having previously been Group Finance Director since 1995. He currently serves as chairman of Standard Life Aberdeen.

China’s BRI is one of the most ambitious global infrastructure development programmes ever conceived, described as having the aim of contributing to a world of ‘shared prosperity’. It involves infrastructure development and investments in 152 countries and international organizations across five continents (including Latin America rather surprisingly). China and the countries along the Belt and Road have been cooperating, not just in building ports, railways, highways and power stations, but also in aviation, telecommunications and information technology.

Sir Douglas explored the origins of the BRI, its development, the role international companies are now playing and why the programme attracts both extensive support and concern from within the international community.

Sir Douglas provided a wide ranging and masterly overview and analysis of the opportunities within this ambitious and controversial project on the implications and opportunities for the UK post-Brexit.

China’s aims for this project reminded me of the ancient adage that ‘All roads lead to Rome’. The Roman’s ambition was that all provinces subservient to the Empire should be linked directly to the city. Does this mean that all roads will eventually lead to China?

It was my privilege to introduce Sir Douglas in my capacity as the President of the HBS Club of London, a role I have held since 2016.

Our core value is reflected in our name. “Vero” comes from the Latin word vērus meaning “true”.

This captures what Vero Consulting is all about: Finding the Truth.

Our commitment to finding and presenting the truth, using a practical and commercial approach, is why our clients choose us.